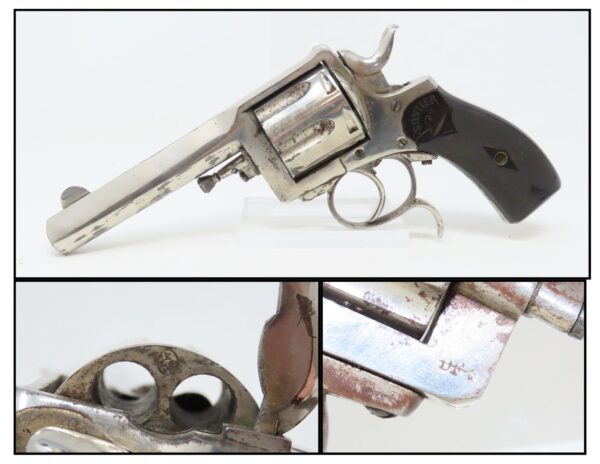 Here we present an antique Belgian Large Frame “Frontier” Army Double Action Revolver by Dumoulin Freres, manufactured in the early 1880s in Liege, Belgium. When people talk about the handguns of the wild west, Colt, Smith & Wesson, and Remington usually come to mind. What’s not usually mentioned were the numerous Belgian made large frame revolvers that were imported by catalog sales companies such as Montgomery Ward and Sears, Roebuck & Company from the 1870s and 1880s.

These firearms rarely bore any specific maker’s name, but rather would sport names like “Frontier”, such as this one. They would describe them in terms that inferred that the guns were “practically as good as Colt and Smith & Wesson” but were priced at roughly a quarter or a third of the prices on the name brand revolvers. Though these guns were well made, the were not equal to the quality of the American made arms of the day. But they did offer a reasonably priced opportunity to protect one’s self, his family, and his property in harsh and often dangerous environments.

This one is virtually a scaled-up “British Bulldog” in style and function. The trigger guard has a spur for the middle finger to rest upon. This one has “FRONTIER” cast into both grips, which was a Colt designation for the cartridge .44-40 WCF. “DF” with a bisecting arrow is stamped on the bottom of the right frame, the maker’s mark of Dumoulin Freres.

The overall condition is fine. Original nickel finish. The action is strong and tight in both double and single action modes. The bore is in very good condition with strong rifling. Both grips are solid remaining in good shape with expected handling wear. Here is a great piece of history to display confidently in the collection!