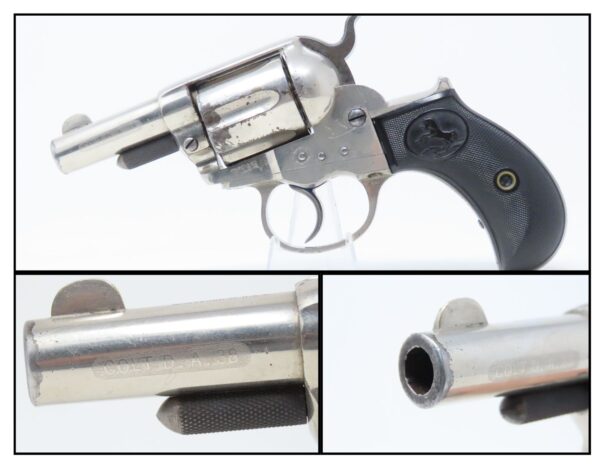 Here we present an antique Etched Panel “Sheriff’s Model” Colt 1877 Lightning Double Action Revolver, made in 1880 in Hartford, Connecticut. The Model 1877 was Colt’s first venture into double action revolvers. It was quite successful, selling 166,849 from 1877 through 1909. Nonetheless, there was some hesitation to move away from the single action mechanism, which had so proven itself. Famous adopters of the Lightning were William “Billy the Kid” Bonney and John Wesley Hardin, along with “Doc” Holliday. Doc’s weapon of choice early in his western career was an 1851 Colt Navy revolver. Later, Doc carried a nickel-plated .41 caliber Colt Thunderer or the .38 caliber Colt Lightning.

This Lightning features an etched panel on the left side of the barrel with the cartridge designation, which is found on the Model 1877s up until the late-1880s when they started to be roll marked. This one was also made without a mounted ejector rod for a sleek and slim appearance. Nickel plate, this revolver has gorgeous fire blue accents throughout, including screw heads and the backs of the hammer and trigger. Colt trademarked hard rubber grips top this one off.

The overall condition is very fine. Original nickel and blue finish with a bit of muzzle wear where it was holstered and unholstered. Excellent action. Fine bore. Firm hard rubber grips. Numbers match. This is a really sharp Colt from 1880!