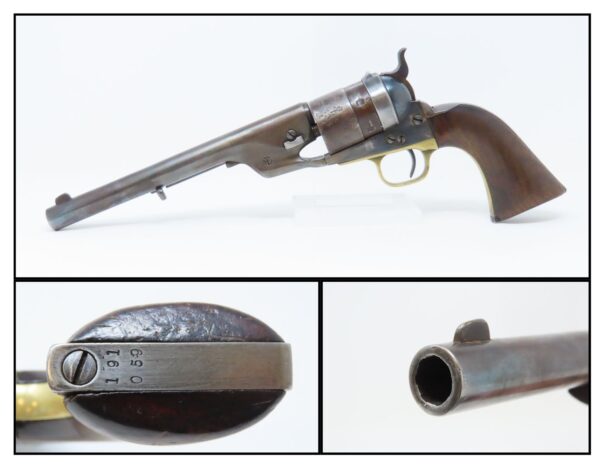 Evolutionary Link from the 1860 Army to the SAA!

Here we present an antique Colt Model 1860 Army Richards Conversion Revolver, manufactured in 1871 and converted sometime between 1871-78. Charles B. Richards was an engineer who worked for the Colt’s Patent Fire Arms Company and was awarded a patent for converting Colt percussion models to breech loading cartridge revolvers. After the onset of the American Civil War, Richards eventually became Superintendent of Engineering at the Colt factory in Hartford, Connecticut. Richards’ first major post-Civil War design was Colt’s second attempt at metallic cartridge conversion known as the “Richards Conversion”.

Colt’s revolvers to this point had been black powder percussion pistols. However, the US Army wanted a revolver that held metallic cartridges, which Colt could not produce because the Rollin White patent was still held by rival Smith & Wesson. Colt’s only solution would be to take off the rear of their cylinders and devise a new method of ignition and case extraction. The Richards Conversion was performed on the Colt 1860 Army revolver. The cartridge was .44 Colt and the loading lever was replaced by an ejector rod. This conversion added a breechplate with a firing pin and a rear sight mounted on the breechplate. Colt manufactured about 9,000 of these revolvers. In 1873 Colt performed the same conversion on the M1851 and M1861 revolvers for the US Navy in .38 rimfire. The Richards conversion was an instant success, all being done concurrently with the iconic Colt Single Action Army, for which Richards was also responsible for development!

The overall condition is very good. The action is strong and tight all the way around. The bore is in good shape. The numbers match except for the cylinder and unnumbered barrel wedge. The grip is in good shape with expected wear. A great example of the scarce predecessor to the legendary Single Action Army!