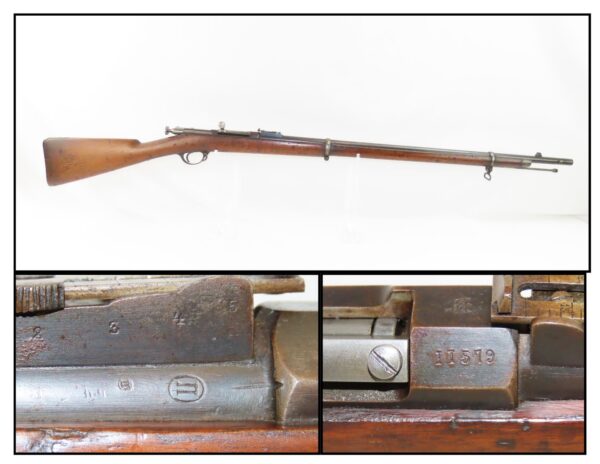 Here we present an antique Imperial Russian Berdan II Single Shot Bolt Action Rifle, made in Russia circa the 1870s. The Berdan rifle is a Russian rifle created by the American firearms expert and inventor Hiram Berdan in 1868. Production of the Berdan I rifle began in 1869 and went on for a couple of years before the Berdan II was introduced. The Berdan Rifle was standard issue in the Russian army from 1870 to 1891, when it was replaced by the Mosin–Nagant rifle. It was widely used in Russia as a hunting weapon, and sporting variants, including shotguns, were produced until the mid-1930s.

As mentioned, two different versions of the single-shot Berdan rifle were adopted as service weapons by Imperial Russia. The first version was manufactured by Colt in the US and is known as the Model 1868, or Berdan I. This hammerless Trapdoor breechlock rifle is one of the 30,000 contracted for the Russian infantry. The second version, as is this one, was the Berdan II, also known as the Model 1870, and was initially produced at Birmingham Small Arms in England. The rifles were later manufactured in large numbers by Russian factories at Tula, Izhevsk, and Sestroretsk. Estimated total production numbers for this model is over 3,000,000. The Berdan Rifle is known for its accuracy, simplicity, and reliability.

The overall condition is very good. The action is strong. The bore is bright with sharp rifling. The inspection stamp on the right side of the stock is dated “1881”. Despite this example having seen its fair share of use, it has retained a solid stock. Here is a great piece of Russian history to collect and display!