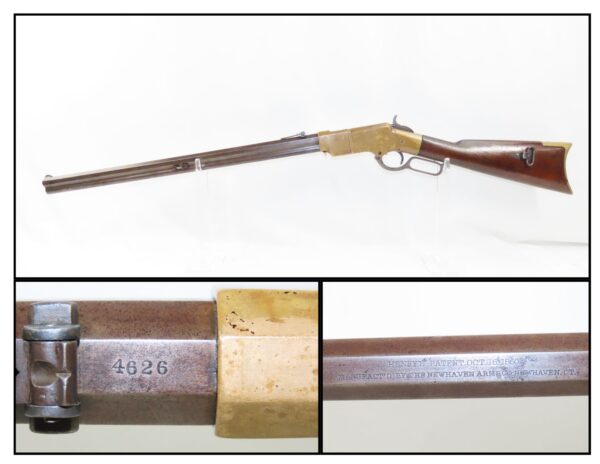 Here we present an antique New Haven Arms Company Lever Action Rifle chambered in .44 Rimfire, made circa 1864 in New Haven, Connecticut. Roughly 14,000 of the revolutionary Henry Rifles were produced from 1860 up to 1866. While not the perfected lever action rifle, the Henry Rifle was the culmination of two previous major lever action repeater attempts and forged the way for the successful line of Winchester rifles to follow. To go back to the start of the Henry Rifle, you have to look at the lives of Horace Smith and Daniel Wesson. Smith took the basic principles inherent in the Lewis Jennings Rifle and produced an improved form through the “Volcanic” rifle and pistol line. In turn, Smith and Wesson then purchased the Jennings patent from Robbins & Lawrence, and more importantly, recruited away their shop foreman, inventor Benjamin Tyler Henry, after whom the rifle was eventually named. With the foundation now in place, the group needed the capital to further their “Volcanic” firearms endeavor. They incorporated to become the “Volcanic Repeating Arms Company” with several investors brought to the table, primary among those was clothing businessman Oliver Winchester. By the end of 1856, the company had fallen on hard times and the Volcanic line failed. Primed for the taking, Winchester moved in and purchased the rest of the company, moved the plant to New Haven, Connecticut, and changed its name to the “New Haven Arms company” at the end of April of 1857. Smith and Wesson left to start their own highly successful venture, and the company continued under the direction of Benjamin Tyler Henry. Henry furthered the development of a new rimfire cartridge and its corresponding lever action rifle, based loosely on the Volcanic. The new cartridge became the “.44 Henry” and the new rifle became the “Henry Rifle”, appearing in 1860.

The Henry Rifle found its way to the battlefield with Union soldiers in the Civil War. Per Flayderman “Quite a few company-size Union outfits, especially those from Kentucky, Illinois, Indiana and Missouri purchased at their own expense, and carried, Henry rifles.” There were also about 1700 rifles purchased by the federal government and issued to the 1st Main and 1st District of Columbia Cavalries. Both the Henry and the comparable Spencer Rifle would introduce the new “lever action repeater” breech loading firearm to the mass market, harkening the beginning of the end of the long-held tradition of single-shot firearms for military service. These rifles saw much hard use during the war as well as afterwards and tend to show it. The historical record also shows that Henrys were among those rifles in the hands of Lakota and Cheyenne warriors when they defeated Custer’s 7th Cavalry in the Montana Territory, at the Battle of Little Bighorn (aka Battle of the Greasy Grass) in 1876.

The Henry Rifle would eventually serve as the starting point for the legendary Winchester Model 1866 just a few years later, and the New Haven Arms Company would be renamed once more to the Winchester Repeating Arms Company at the end of the American Civil War.

This rifle features a 24-inch octagonal barrel and crescent butt plate with a trap or compartment for a cleaning rod. The magazine holds 15 shots and is loaded by swiveling the front portion of the barrel to the side. The rear sight is graduated out to 900. Sling mounts are located on the left side of the walnut stock and the barrel. The Henry rifle appears peculiar to the modern eye due to its lack of a fore stock and a loading gate in the receiver—two things that were remedied with the Winchester 1866. This may appear a simplistic-looking lever gun, and it is. Yet it was the cutting edge of firearms technology in its day and sparked a revolution in firearms development that was only really rivaled at the time by Christopher Spencer’s namesake rifle and carbine. It is a must for the collector of Civil War, cowboy, Winchester, or firearms evolution in general. These are quite rare, especially in this condition, given how, when, and where they were used.

The overall condition is very good+. Original finish/patina. The action is excellent. The markings are clear. The serial number is relatively early and made well before the American Civil War came to completion. Numbers match. The walnut stock remains solid and smooth with requisite handling. There is a short, hairline split along the grain on the left side of the wrist and on top, just behind the receiver tang, that are stable and do not move. The bore is in good condition with clear rifling. This is a wonderful, original, Civil War manufacture Henry Rifle that would have seen use well into the late-19th Century!