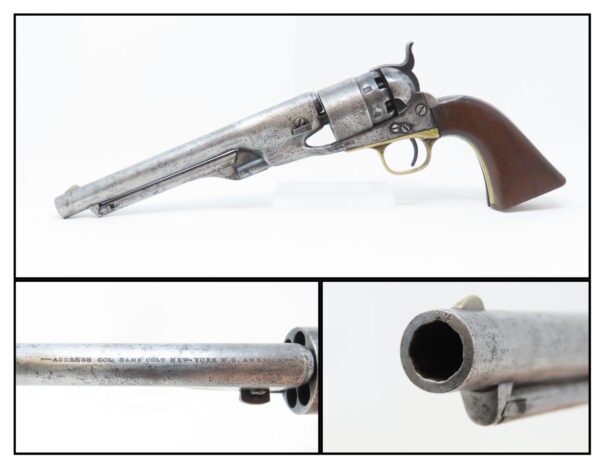 Here we present an antique Colt U.S. Model 1860 Army Percussion Revolver, made in 1863 in Hartford, Connecticut. The 1860 Army was the single most used pistol of the American Civil War. Over 200,000 were made from 1860 to 1873, and 156,000 of those were made by the end of the war in 1865. These were excellent sidearms for officers, cavalry, infantry, and artillery troops. The 1860 Army was Samuel Colt’s finest achievement to that point, having finally developed a large caliber revolver that weighed about 2 lbs. 10 oz. to the famous Dragoon’s 4 lbs. 4 oz., and was adopted en masse by the U.S. government with huge contracts.

The overall condition is good. The action functions. The cylinder revolves, indexes and locks up on all but one chamber, which tends to overthrow just a bit. Good bore for age. The replacement grips are rudimentary and old and remain in good shape. The cylinder scene is partially visible. Numbers match. US Ordnance inspection marks throughout and the stock and recoil shield are cut for the stock as military units were. A solid piece of history from Colt that went through the war!