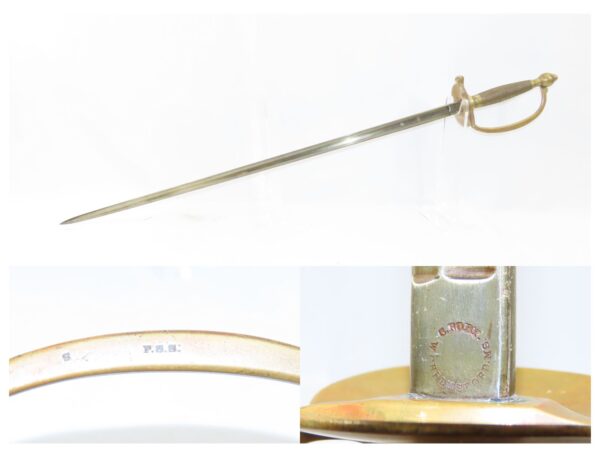 Here we present an antique Christopher Roby U.S. Model 1840 Non-Commissioned Officer’s Sword, made circa 1863 in West Chelmsford, Massachusetts. Christopher Roby maintained a steady business making items like scythes and other farm implements until the embargo on the South during the American Civil War caused him to seek other product lines to make ends meet. In 1862 he began contracting with the U.S. to provide several different models of sword. Roby’s N.C.O. sword contracts totaled 12,500 swords spanning between 1862 and 1865. His total wartime production of swords numbered 48,410 compared to hundreds of thousands produced by companies like Ames. Roby (1814-1897) was commissioned on September 5, 1864 to raise up his own local cavalry named Troop F, Massachusetts Volunteer Militia, of which he was chosen Captain, to be protectors against Confederate raids in northern Massachusetts. Unfortunately, his company was bankrupt by 1867, a mere 2 years after the end of the war. The Model 1840 NCO was issued to sergeants as a secondary weapon. It saw use primarily during the Mexican-American War and the American Civil War.

The overall condition is very good. The hilt is solid. “US/1863/F.S.S.” (for US Ordnance Inspector Fredrick S. Strong) is marked on the ricasso. Here is a great example of a scarce Roby Non-Commissioned Officer’s sword to collect and display!