‹ Back to the shop
View cart “GUSTAVE YOUNG Engraved Antebellum COLT Model 1851 NAVY Revolver ft. DOGS Manufactured in 1856 in Hartford, Connecticut!” has been added to your cart. 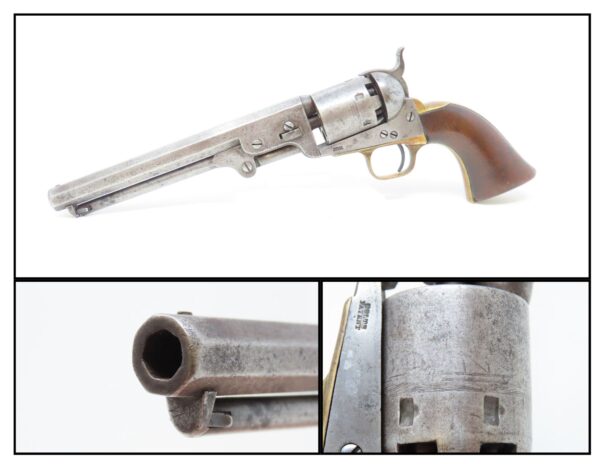 Manufactured in 1862 in Hartford, Connecticut!

Here we present an antique Colt Model 1851 Navy Percussion Revolver, made early in the American Civil War in 1862 in Hartford, Connecticut. The 1851 Navy was one of Colt’s most famous and successful lines, reaching a production total of 257,348 from 1850 to 1873 (right up to the time of SAA production) from both Hartford and London factories. From Hartford alone, 185,000 were made by the end of the American Civil War. Many of these saw service during the conflict on both sides. There were some military purchases and lots of private purchases by soldiers going off to war. In addition, the Model 1851 was carried by Confederate General Robert E. Lee and was a favorite of “Doc” Holliday and “Wild Bill” Hickok, who carried two of these most famously in his red sash.

The overall condition is very good. Excellent action. Nice bore. You can see how many times this revolver was holstered and drawn by how the front sight and the octagonal barrel’s corners have been rounded down. Remnants of the cylinder scene remain. Nice patina on both the steel and the brass. The walnut grip remains smooth and solid. Numbers match. Here is an iconic revolver from Colt that would have been used during the American Civil War and beyond!