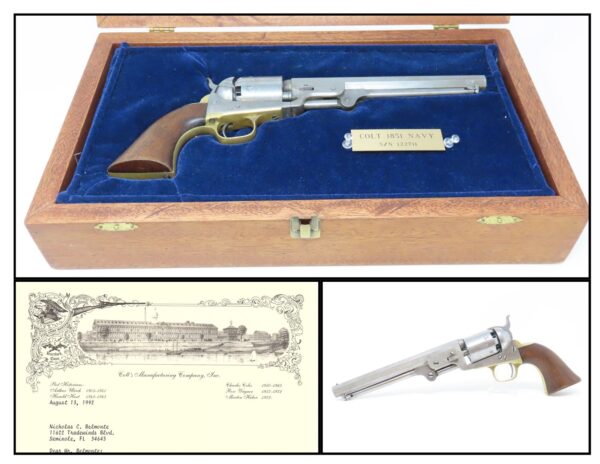 To Tyler Davidson & Co. for Sale to State of Ohio Militia!

We propose to supply to your order 1000 or 2000 “Colts” and “Beals” best Navy Revolvers complete @ 22 50/100 each: delivery to commence immediately on receiving the requisition, and continuing at the rate of about 100 pr day. Terms of Payment: Cash in all the months of November and December and final payment not later than 25th of December.

Tyler Davidson had the largest hardware store in Cincinnati during this period. One of his clerks, Henry Probasco, would later become his business partner and prompt the “& Co.” of Tyler Davidson & Co. Henry would help the business achieve new heights of success. Upon Tyler’s death in 1865, Henry sold the business and traveled Europe in 1866 with his wife. It had been Tyler and Henry’s intention to build a public fountain in Cincinnati, but it had never gotten further than an idea, possibly due to the Civil War. In 1867, Henry returned to Cincinnati having been to a foundry in Munich and arranging for a magnificent sculpture to be made out of old cannon brass. In 1871, Henry presented the monument to the city, what is now called the Tyler Davidson or Probasco Fountain. It was a large and beautifully ornate piece that was designed to offer a drink to any passerby. This was to promote “temperance”, the movement that was popular at the time to discourage the consumption of alcohol. The original design even chilled the water to provide exquisite refreshment before modern refrigeration and to provide an alternative to saloons for a cool drink. This monument still stands today.

The 1851 Navy was one of Samuel Colt’s most famous and successful lines, reaching a production total of 257,348 from 1850 to 1873 (right up to the time of SAA production) from both Hartford and London factories. From Hartford alone, 185,000 were made by the end of the American Civil War. Many of these saw service during the conflict on both sides. There were some military purchases and lots of private purchases by soldiers going off to war. In addition, the Model 1851 was carried by Confederate General Robert E. Lee and was a favorite of “Doc” Holliday and “Wild Bill” Hickok, who carried two of these most famously in his red sash.

The overall condition is very good. The action is strong and crisp. The bore remains in good shape with sharp rifling. The cylinder scene remains visible. The walnut grip is in nice shape with only a tiny chip missing from the left toe. All numbers match. This example comes display ready with a navy blue felt lined glass-topped case as well as the Colt Archive Letter. This is a wonderful set with a history that sets this Colt Navy apart!