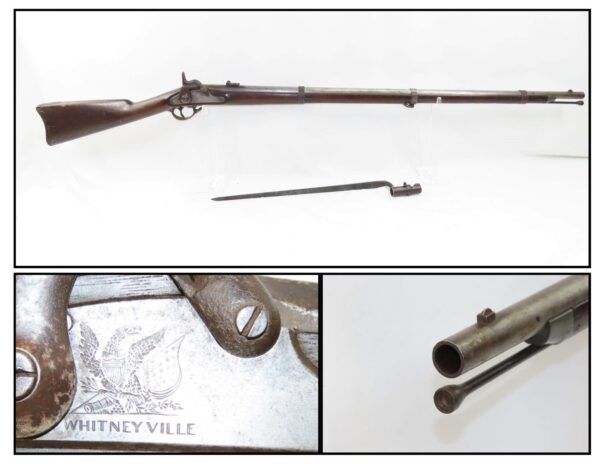 Here we present an antique E. Whitney Connecticut Contract Model 1861 percussion rifle-musket made in New Haven, Connecticut, circa 1862. Eli Whitney Jr. and his family legacy, Whitneyville Armory, played a large role in providing small arms to the Union during the American Civil War. This musket was part of his “Good and Serviceable Arms” line, which was focused on providing arms to state militias, though he did have contracts with the federal government as well. The Good and Serviceable Arms were made of large lots of parts which he purchased from the federal armories and other contractors to assemble into rifle-muskets good enough for service with the states who, unlike the federal government, had lesser standards and did not use gauges during their inspections. He wasn’t shy about this either. These arms were good enough, better to be sure than many of the muskets being bought and shipped back from Europe, and they were less expensive than had they been built from the ground up with all the gauging that went into federal contracts.

Whitney completed his deliveries under the initial contract for 6,000 arms to the State of Connecticut on time in July of 1862 and was rewarded with a second contract of 8,000 arms at the same price. As with the first contract, Whitney supplied the guns quickly, and by mid-March of 1863 all 8,000 had been delivered and accepted. According to research by Howard, Madaus, and Moller, Whitney muskets are known to have been issued to the 13th, 14th, 15th, 16th, 18th, 20th, 21st, 22nd, and 27th regiments of the Connecticut State Infantry. There is no doubt that some other Connecticut regiments must have received at least a few of the contract arms as well.

The overall condition is very good. Strong, tight action. Good bore. This example sports a solid walnut stock. “WHITNEYVILLE” is engraved on the lock. The bayonet is in good shape and is stamped “US”. Here is a great example of a Civil War militiaman’s musket from Whitney!