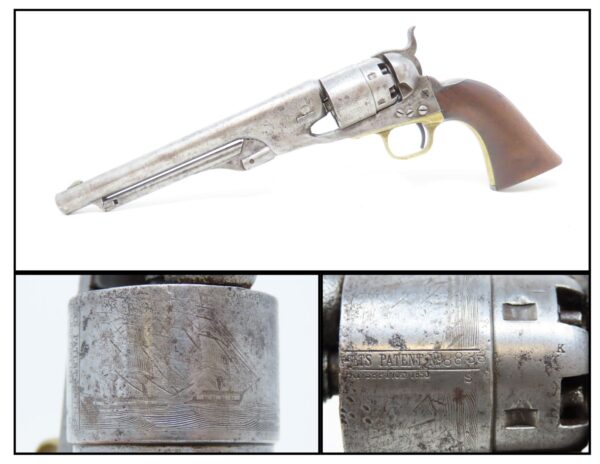 Here we present an antique Colt U.S. Model 1860 Army Percussion Revolver, made in 1861 in Hartford, Connecticut. The 1860 Army was the single most used pistol of the American Civil War. Over 200,000 were made from 1860 to 1873, and 156,000 of those were made by the end of the war in 1865. These were excellent sidearms for officers, cavalry, infantry, and artillery troops. The 1860 Army was Samuel Colt’s finest achievement to that point, having finally developed a large caliber revolver that weighed about 2 lbs. 10 oz. to the famous Dragoon’s 4 lbs. 4 oz., and was adopted en masse by the U.S. government with huge contracts.

This is one of the earlier designs with the distinction of having a 4-screw frame. This was an early method of attaching a butt stock to make these revolvers into carbines for mounted troops. The cylinder roll engraving on the 1860 Army features a scene from the Battle of Campeche executed by American engraver Waterman Ormsby. The engraving pays homage to Texas in their fight with the Mexican government for independence. During this particular battle, the Mexican Navy wielded two ironclad steamers, while the Texans were armed with a variety of wooden ships, led by Commodore Edwin Moore. The scene also appears on the cylinders of the Colt 1851 and 1861 Navy Revolvers.

The overall condition is very good. Gray patina. Signs of weathering and use. There is a divot just above the barrel wedge where the wedge screw would have gone. Nice, tight action. Good bore with strong rifling. The grip is in very good shape containing less than expected wear. Numbers match. The cylinder scene remains quite nice and visible. A Colt 1860 Army made early in the war!