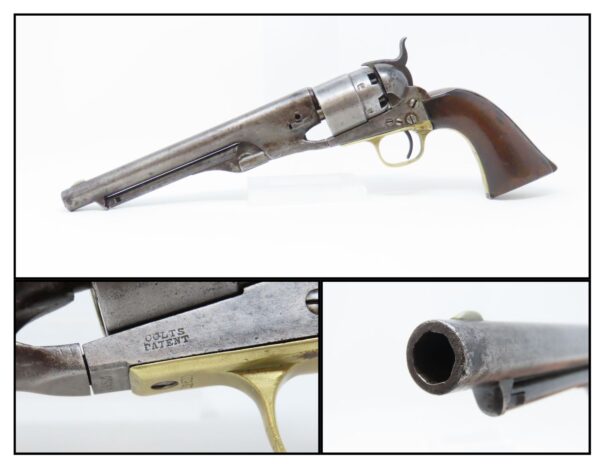 Here we present an antique Colt U.S. Model 1860 Army Percussion Revolver, made in 1861 in Hartford, Connecticut. The 1860 Army was the single most used pistol of the American Civil War. Over 200,000 were made from 1860 to 1873, and 156,000 of those were made by the end of the war in 1865. These were excellent sidearms for officers, cavalry, infantry, and artillery troops. The 1860 Army was Samuel Colt’s finest achievement to that point, having finally developed a large caliber revolver that weighed about 2 lbs. 10 oz. to the famous Dragoon’s 4 lbs. 4 oz., and was adopted en masse by the U.S. government with huge contracts.

The overall condition is good. Strong action. Good bore. The grip is in good shape with an expected amount of wear. This gun has two set of numbers: the cylinder, barrel, and frame are numbered 24596, while the trigger guard and grip frame are numbered 12610. The wedge is an unnumbered replacement, and the wedge screw is absent. The wedge is tight and there is no movement between barrel and frame. A very affordable example of an early 4-screw 1860 Army by Colt!