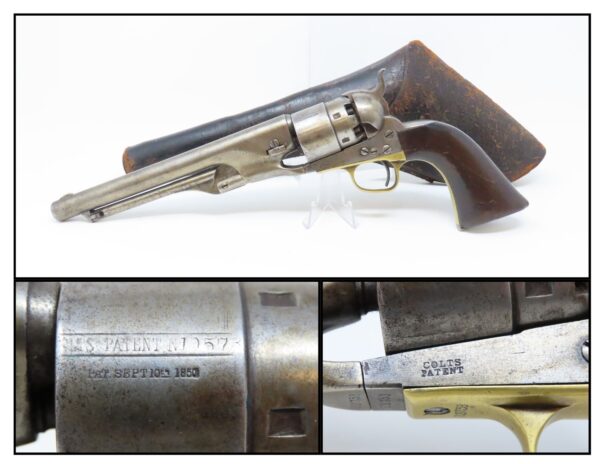 Early Variant of the ACW’s Most Prolific Sidearm!

Here we present an antique Colt U.S. Model 1860 Army Percussion Revolver, made in 1861 in Hartford, Connecticut. The 1860 Army was the single most used pistol of the American Civil War. Over 200,000 were made from 1860 to 1873, and 156,000 of those were made by the end of the war in 1865. These were excellent sidearms for officers, cavalry, infantry, and artillery troops. The 1860 Army was Samuel Colt’s finest achievement to that point, having finally developed a large caliber revolver that weighed about 2 lbs. 10 oz. to the famous Dragoon’s 4 lbs. 4 oz., and was adopted en masse by the U.S. government with huge contracts. The revolver was well balanced in hand and had a long enough barrel to be effective when utilized as a carbine with the attachable shoulder stock.

This revolver represented unprecedented firepower from a handgun in the field at the time and was especially suited to Cavalry. The Confederacy, lacking in manufacturing capabilities though they were, managed to produce limited numbers of copies, and battlefield pickups of the 1860 Army were highly coveted. The 1860 Army went on to serve the U.S. military even after the Civil War and into the Indian Wars, until production of Colt’s 1873 Single Action Army created new waves in the revolver market, and again achieved great success in the military and commercial markets.

The overall condition is very good. The action is strong and tight. The bore is in nice shape with good rifling. The grip is seated firmly and contain expected wear. The numbers on the grip, trigger guard, frame, barrel, and arbor match. The barrel wedge and cylinder do not, however, they do appear to have been with the gun for the vast majority of its life, and were probably swapped while cleaning with others around the campfire. The period leather flap field holster is in nice shape for age—these are scarce in any condition since leather tends to deteriorate much faster than wood and steel. There are a couple hints of scratched-in initials: one on the flap and one on the outside of the bucket. This is a great rig from the American Civil War!