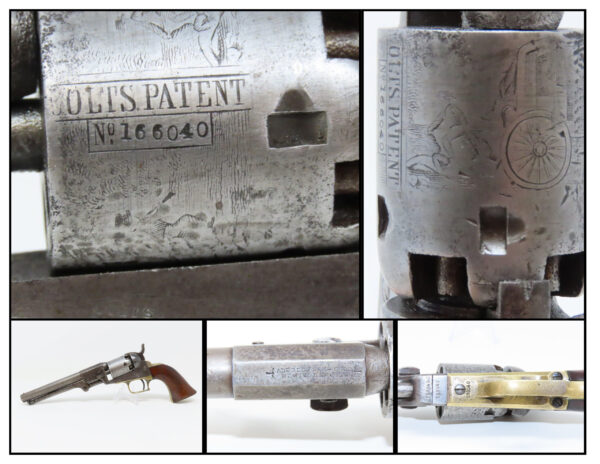 Made In 1860 with Dragoon Style Barrel and Trigger Guard!

Here we present an antique Custom Colt Dragoon Style Model 1849 Pocket Revolver, made in 1860 in Hartford, Connecticut. Over 280,000 of these were produced by Colt’s factory at Hartford by the end of the American Civil War in 1865. These were very popular and saw a lot of use on the battlefield, on the home front and in the West. These were some of the smallest, handiest pocket revolvers of the time and were actually the most prolific of all Samuel Colt’s line of percussion guns.

This one is extremely interesting for the fact that it bears a striking resemblance to one of Samuel Colt’s most famous inventions, the Dragoon revolver. The Dragoon design was the product improved follow-up to the Colonel’s Walker design, which put him back in business after his Paterson failure. This revolver features the part-round barrel and the square-back trigger guard like the Dragoon. Very rare.

The overall condition is very good. The action is strong. The bore is in great condition. The stagecoach robbery cylinder scene is still quite visible. What we believe to be read as “John R. Quint” is hand engraved on the top of the grip frame (“John R.” is relatively clear, though the last name is open to interpretation). Muted but visible case colors on the frame, hints of silver plate and blue finish, and an even patina throughout. A fantastic find!