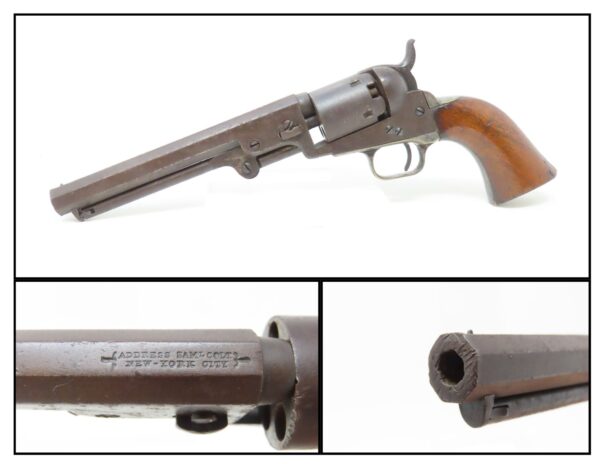 Here we present an antique Colt Model 1849 Pocket Revolver, made in 1852 in Hartford, Connecticut. The Model 1849 Pocket, the replacement for the Baby Dragoon, was the most widely produced of any Colt percussion pistol. Nearly 340,000 were manufactured during its 23-year production run that ended in 1873. Over 280,000 of these were produced by Colt’s factory at Hartford by the end of the American Civil War in 1865. These were very popular and saw a lot of use on the battlefield, on the home front and in the West. These were some of the smallest, handiest pocket revolvers of the time.

The overall condition is very good. Very dark, matte patina with good, dark silver plate finish on the brass frame. Strong action. The stagecoach robbery cylinder scene remains visible. Good bore with strong rifling. The muzzle shows that this revolver’s barrel was somewhat battered long ago. The grip shows handling and holster wear. Numbers match. A very nice example of an early Colt Model 1849 with an honest complexion that was obviously used as an improvised tool during the period of use.