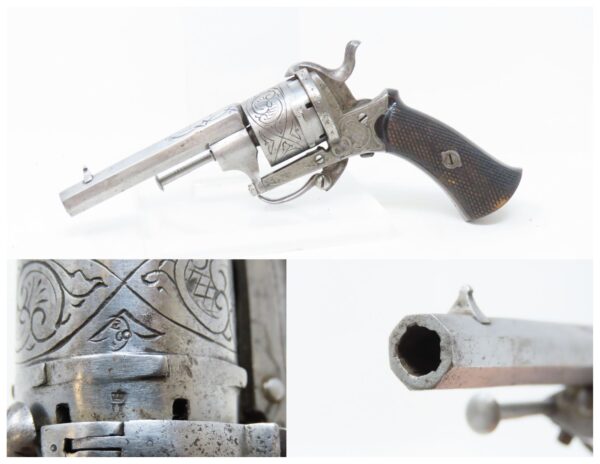 Here we present an antique Liege proofed Belgian Pinfire Folding Trigger Double Action Revolver, made in Belgium circa the 1850s. In 1835, notable gun maker and inventor Casimir Lefaucheux patented one of the first self-contained firearms cartridges. This very early design included a case with ball, powder and primer, but what made it different from what was to come later in cartridge development was the “firing pin” that projected out of the side of the case. It was this pin that was struck and detonated the primer inside. His son, Eugene, would build on Casimir’s invention, designing a pistol to take advantage of it. The hammer would be flat and smash down on the side of the cylinder, from which the pin of the cartridge would project. This revolver and pistol design would become prolific, especially in Europe throughout the 19th Century, being adopted by militaries, used by civilians and police, and even being sold for use during the American Civil War. Many makers made both licensed and unlicensed copies.

This little self-defense pistol would have been most at home in the pocket of anyone in the busy city of Liege, London, or Paris during the tumultuous times of the mid-1800s. These type pistols are small, light and simple. The “Pocket Pistol” name says it all. They were the “Saturday Night Specials” of the 16th-19th century. Before the Deringer, they were “Gentleman’s” or “Muff Pistols”, typically, a smaller pistol that was easily concealed. They were favored among the gentry and women because of these traits. Men would carry them concealed in a waistcoat pocket and women would hide them in a hand muff.

The overall condition is very good. The action is partially functional: the trigger will drop the hammer but the trigger’s return spring is weak or absent. The cylinder does not revolve. The grips are in good shape. The bore is dim with good rifling.