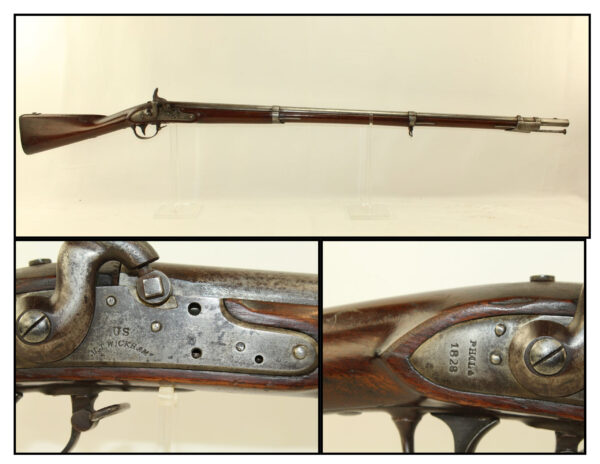 Here we present an antique Wickham Model 1816 Conversion Musket manufactured in Philadelphia, Pennsylvania by Marine T. Wickham in 1828, and was typically used by the militia in the early 1800s. “Probably the most notable armorer to work at Harpers Ferry before 1816 was Wickham. This musket was originally made when flintlock was still the firing system used in the developed world. This musket may have been made 33 years prior to the American Civil War, however, it was still a viable firearm by military standards with an update to the percussion firing system. This was done by removing the frizzen and pan, installing the drum and percussion nipple, and replacing the hammer. This musket remains in fantastic condition despite the many decades of military service during the Texan War for Independence, Mexican-American War, Indian Wars, and Civil War. It could have been used by Union or Confederate soldiers.

The lock and tang are both marked “1828”. The lock is marked “US” over “M.T. WICKHAM”. Inspectors’ markings are found on the left side of the barrel and the left stock flat. “LS” is for inspector Luther Sage.

The overall condition is very good. The bore is smooth and in nice shape. The action remains excellent.