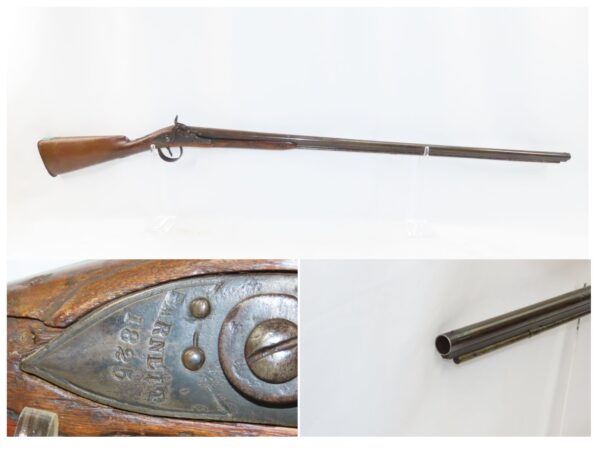 Here we present an antique Barnett Hudson Bay Company Large Bore Percussion Conversion Northwest Trade gun, made circa the 1825 in England. This gun would have started out life as a flintlock and converted when the more reliable percussion system was introduced. This Barnett musket is typical of the guns made available for trade by fur trading companies in northern North America during the early and mid-nineteenth century, most notably by the Northwest Fur Company and, after 1821, by the Hudson’s Bay Company. However, the American Fur Company, the Mackinaw Company, and the U.S. Indian Trade Office also traded Barnett muskets to Native Americans.

Trade guns like the Barnett musket were typically referred to as “Northwest guns,” “Mackinaw guns,” or “Hudson’s Bay fukes.”  Less expensive than guns destined for Europeans or American buyers, these Indian trade guns were normally of light weight with relatively short barrels, were usually designed to fire a shot weighing an ounce or less, and had a trigger guard large enough to allow the gun to be used with gloves or mittens during the coldest months of the year.  Typically, Barnett muskets were sold with a side-plate embossed with a dragon ornament, such as this one, that decorated the side of the gun opposite of the locking mechanism, offering Indians an easily recognizable mark of authenticity. Even before the first land-based fur traders arrived in the Pacific Northwest, Native Americans along the coast had already been acquiring firearms from maritime traders for more than a generation.  Because guns helped in the procurement of furs, it was advantageous for European and American fur traders to make them available for trade.

Additionally, since firearms required a continual trading relationship in order to keep the gun-buyer supplied with gun powder, shot, flint, and replacement parts, fur traders found the trade-based dependency to their advantage.  Native Americans, not blind to their dependency upon Euro-American traders for gun supplies, found value in their firearms as tools for territorial expansion, self-defense, and hunting.

This example has been around the block. The action functions (light hammer drop). Oversized trigger guard. Good bore (aged). This example has cracks on both side of the wrist that allow for movement in the buttstock. The buttstock also has a missing chip in the toe. “BARNETT/1825” is marked on the lock. Hand checkered stock and fore end. A gun that was obviously used hard!