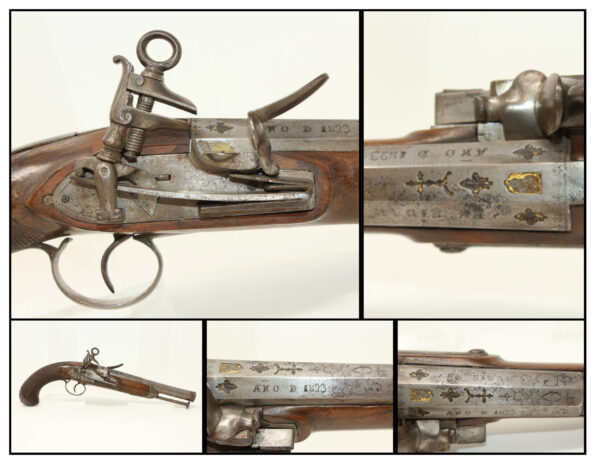 Here we present an antique Spanish Military Flintlock Pistol by Zuluaga, made circa 1823 in Eibar, Spain. This is an early form of flintlock known as a miquelet, which was developed in Spain and used throughout the Mediterranean region to include Italy, the Ottoman Empire and North Africa. This one is a large pistol that would have been intended for use on the back of a horse, carried in a pommel holster. This was made during a time of major upheaval as Spain struggled to recover from the Napoleonic Wars, its colonies fought for their independence, and internal conflict and Civil War precipitated several regime changes from monarchy to republic and back to monarchy (Ferdinand VII). In fact, this pistol was made the same year the so-called “liberal government” was defeated by the French and Ferdinand reinstalled as king. The Carlist Wars were sparked when, upon King Ferdinand VII’s death in 1833, Isabella II became Queen instead of Carlos de Borbòn. This pistol saw a lot of Spanish history pass in its lifetime.

The overall condition is very good. The bore is smooth and in very nice shape. The action is excellent and fully functional.