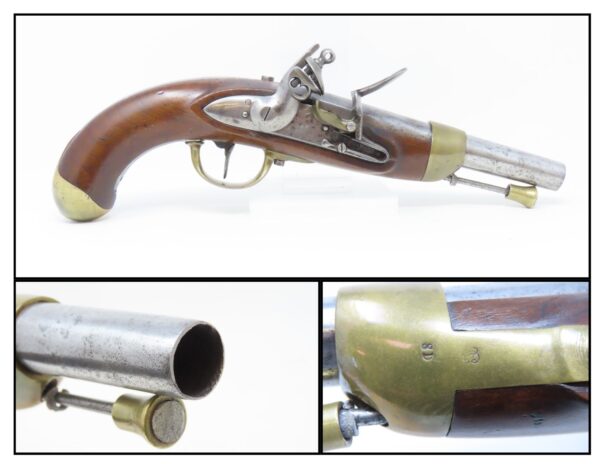 Here we present an antique French Model 1822 T-Bis Flintlock Military Pistol, made circa the 1820s at one of the French National Armories. The arsenals produced arms such as swords from medieval times to up until the mid-1900s. This pistol was built new in the flintlock format, while many of others like this had been built as flintlocks before being converted to percussion. It was used by cavalry and marines alike. This pistol is very likely to have seen action in any of France’s many colonies during this period. Other significant conflicts include the Second French Intervention in Mexico as well as the Franco-Prussian War.

The pistol is of robust construction with lots of brass for support. The bore is a substantial .69 caliber. The markings on this pistol are plentiful. Multiple other proof and acceptance marks can be found throughout.

The overall condition is good. The action partially functions, as it will not fully cock (weak sear spring). Smooth bore. Solid stock all around. A big French military pistol from the 1820s!