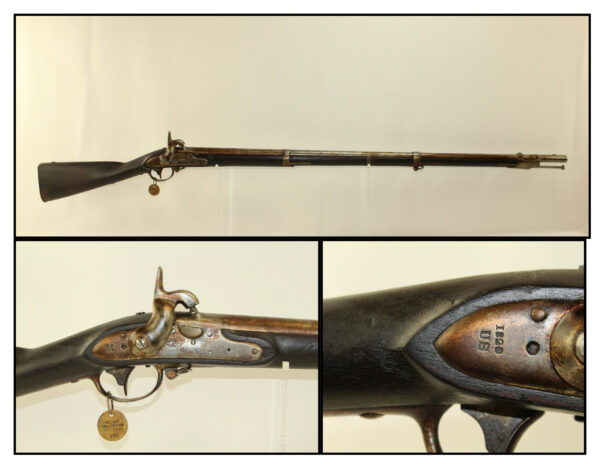 Here we present an antique Lemuel Pomeroy US Model 1816 Conversion Musket, manufactured in Pittsfield, Massachusetts, circa 1820-28. This Model 1816 flintlock musket has been converted to percussion using the Belgian Style Alteration method, more commonly known as the “Cone Type” conversion. All external lock parts were removed with the screw hole plugged, the pan ground flush with lock plate (leaving the remnants intact) and the small existing cavity in the pan filled with brass to give it a level or squared off profile along the top. The vent hole of the barrel was plugged with a nipple screwed into the threaded receptacle at the top of the barrel, set off center towards the lock side. Then, adding the distinctive arsenal, military hammer.

The War of 1812 revealed many weaknesses in American muskets. In an attempt to improve both the design and manufacture of the musket, the Model 1812 musket was created. The Model 1816 made further improvements, and replaced the Model 1812. Harpers Ferry became America’s second national armory after the site was personally selected by George Washington, with the Springfield Armory being the first. The U.S. Congress authorized the building of the new foundry in 1794, and by the following year, was producing hundreds of arms for the national army, which was primarily flintlock muskets and pistols. Inspired largely by the French Charleville Model 1777 musket, Harpers Ferry began producing the Model 1816. The M1816 was a smoothbore, muzzle loading weapon which used a .69 caliber musket ball

The advent of the Model 1842 Musket made the M1816 obsolete, but not unserviceable. Eventually, most made their way to storehouses and armories. Beginning in 1848, when more than 700,000 of all types of flintlock muskets where reported in storage, the most serviceable where converted to percussion ignition. Three types of alteration were performed. All alterations involved grinding the flash pan down and replacing the hammer. The “French Style” conversion added a drum and nipple to the flashhole. The “Belgian Style” involved plugging the vent hole with a weld and tapping a nipple directly into the barrel. This is the type of conversion that was only done at Harper’s Ferry and Springfield and is sometimes referred to as an “armory conversion.” The last type of conversion was used late in the renovation process, beginning about 1852, and involved adding a bolster to the breech of the barrel, so it is termed the “Bolster Style” of conversion.

The M1816 was in production at Springfield (325,000) and Harpers Ferry (350,000) between 1816 to 1844 with around 675,000 muskets produced during this run. Additionally, more than a dozen contractors also made the Model 1816 Muskets, like this one, during its production years, adding more than 146,000 muskets for a grand total of 821,421 M1816 Muskets produced. It saw service during the Mexican-American War and was even pressed into service during the Civil War in both the updated percussion and the old flintlock format. In the 1850’s, many 1816’s went through the conversion from flintlock to percussion.

The overall condition is very good. Requisite handling marks may be observed throughout for a military musket that is now 200 years old! Smooth, dark bore. The action remains strong. This one comes from the Weller Collection of Princeton, New Jersey and still bears the numbered inventory tag. Such a great and early musket with a very long service life!