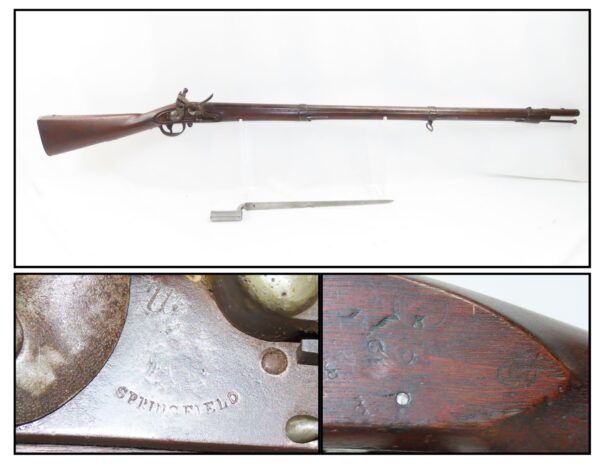 Reconverted Flintlock Made in 1816 with BAYONET

Here we present an antique U.S. Springfield Model 1812 Flintlock Musket, manufactured circa 1816 at the Springfield Armory in Springfield, Massachusetts.

The War of 1812 revealed many weaknesses in the earlier Model 1795 American musket. In an attempt to improve both the design and manufacturing process of the musket, the Model 1812 musket was created. The design borrowed heavily from the French Charleville model 1777 musket. The Springfield Model 1812 musket arrived too late to be used in the War of 1812 but would later become standard issue to regular infantry and militia units.

The Model 1812 was a .69 caliber smoothbore musket that was only produced at the Springfield Arsenal, while the Model 1795 would continue in production at Harpers Ferry into 1818. The Model 1812 was produced in a quantity of almost 30,000 between the years 1814 and 1816. It was replaced by the Model 1816 Musket. However, the Model 1812 remained in service for many years, and was even used in the American Civil War, mostly by the Confederate forces. By the start of the Civil war, the weapon was considered to be old and obsolete but was needed to fill arms shortages.