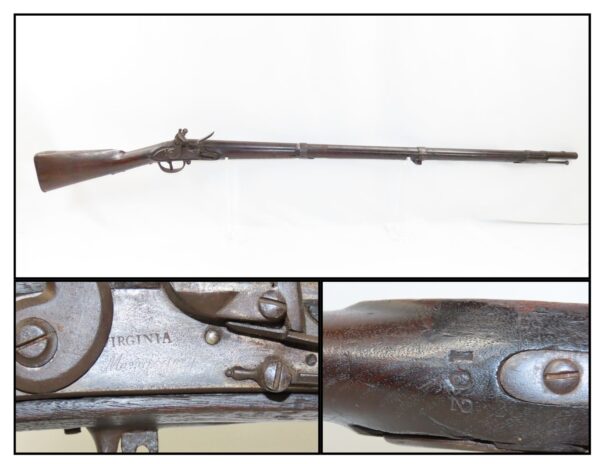 Richmond, VA MUSKET Made in the Only State-Run Armory!

Here we present a Rare Antique Richmond Manufactory War of 1812/Civil War Flintlock Musket, originally made in Richmond, Virginia circa 1815. The original 1st models were produced between the time the Manufactory opened in 1802 through 1808 and the 2nd model Virginia Manufactory Muskets were built from 1809 to 1815.They were completely hand built and as such several variations have been noted between muskets.

The year was 1798. America was still facing many uncertainties on all fronts. Naval conflicts from England and France were constant threats. The harassing of U.S. ships interrupted firearm supply routes that caused concern for the US federal government. There was a great need to supply the states with weapons for local militias. With the supply being so low, many states attempted to import arms on their own through the open market in Europe. But this was expensive and shared the same risks. Some states relied on the slow-moving federal armories, and waited for what they could get, when they could get it. Though, Virginia didn’t have time to wait for gifts from the federal government. They had a better idea in mind! After jumping through a few hoops, plans for the Virginia Manufactory of Arms had begun. Virginia was the only state to operate a local armory.

In 1802 the first state owned firearm factory began production under superintendent, John Clarke. The factory produced not only firearms, but swords and bayonets all the way up until 1821 when production ceased. By this time, many other sources of firearms were being more readily produced and the armory was no longer necessary. That and, according to Giles Cromwell, Virginia went through a period of stagnation due to economic factors in the state that lasted from about the time the Manufactory closed up to when the Civil War began.

Due to the shortage of percussion small arms at the onset of the Civil War, the bulk of Stonewall Jackson’s divisions were armed with flintlocks at the start of the Valley Campaign, including many from the Virginia Manufactory arsenal. When the Civil War began, records show that virtually none of the Virginia Manufactory muskets had been converted at all. From October 1, 1859 to November 1, 1861 over 44,000 Virginian long arms were issued from stores, all still in their original flintlock configuration. No other flintlocks are recorded as having been distributed after this last date, and Cromwell suggests that this was the beginning of a campaign to cycle these muskets back through for update and conversion to percussion.

There was a short revival period of the factory during the Civil War, but in 1865 a fire destroyed the interior and it was never rebuilt. In recent years, a Federal Bank and a packaging company have completed construction over top of the Manufactory’s original site leaving no traces of the country’s earliest state-owned firearm factory. All we have left to remember this part of history by are a few public records and the products the factory produced. Luckily, we have one of those few muskets here!

The overall condition is very good—especially given its age and use. The action is as strong as ever. Nice smooth bore with appropriate patina. The stock is in good shape, dark in color, and has survived the test of time. Only signs of honest, period use. “1815” dated lock. The number “102” is stamped on the barrel and stock, most likely a rack number for an arsenal or militia. The number “6” repeats throughout and is a batch/assembly number. This is a solid example of a very rare Virginia Manufactory musket, likely used during multiple conflicts. It is truly an amazing firearm that it is yet available to be preserved as an artifact of the Civil War and the State of Virginia.