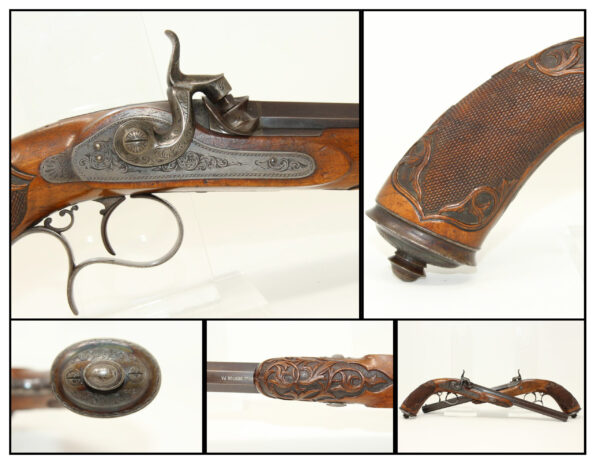 Here we present a Brace of Antique Single Shot Percussion Dueling Pistols by Gastinne-Renette of Paris, France circa the 1850s. Dueling was a centuries old French institution by this time. Henri Renette began gunmaking under his own name circa 1793. Louis Gastinne would join him as a partner in the early 19th Century. Louis’s son, Louis-Julien Gastinne, would marry Josèphine Adèle Renette, the daughter of Henri, in 1834 and begin to make the joined family names truly famous. He proceeded to become the gunmaker to Emperor Napoleon III and his court as well as the king of Spain. The shop would become a destination for aristocrats in 19th Century Paris to purchase fine weaponry as well as to prepare for duels, which were still used to settle matters of offense and honor.

The octagonal barrels have fine post front sights and “FNI. PAX. GASTINNE RENETTE A PARIS” on top. Fixed u-notch rear sights are at the breech on the upper tang. The metal components other than the barrels have matching floral scroll engraving and are finished in French gray. The stocks have fine figure, elegant intertwining floral scroll carvings and fluted grips. Louis-Julien Gastinne-Renette was the gunmaker to Napoleon III as well as the king of Spain. Exhibition pistols of this same basic pattern by the firm are contained in some of the world’s finest art museums. These pistols bear partially visible US import markings on the bottom of each barrel: “WOODCOCK HILL BENTON PA”.

The overall condition is very fine. The bores are bright with excellent rifling. The actions are both excellent, strong and crisp. The triggers are not set but are very fine tuned and light. These two are incredible pistols and they would make a fantastic display in your office or library.