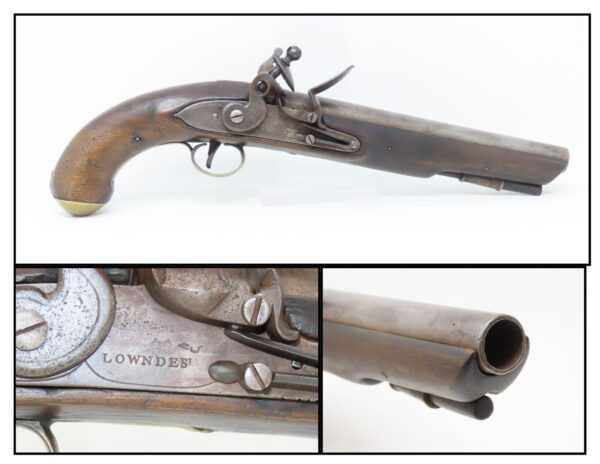 Here we present an antique British Lowndes Flintlock Pistol, made circa the early-19th Century. This pistol is of a large frame and has a gaping .69 caliber bore. Then as now, rifles and muskets were the primary arm of the day, useful for everything from hunting to combat. Pistols were certainly not as numerous but still very useful for combat since most firearms at this time were limited to a single shot. Bringing multiple pistols would have been the 19th Century version of a New York re-load.

The overall condition is very good. The action is strong. The bore is smooth and dark. The stock has been restored and a graft is visible under the barrel. “J.T.” is stamp on the left stock. “LOWNDES” is stamped on the lock. Birmingham proofs on the barrel. British Ordnance broad arrow on the lock. This is a stout pistol that will make an excellent historical addition to the collection!