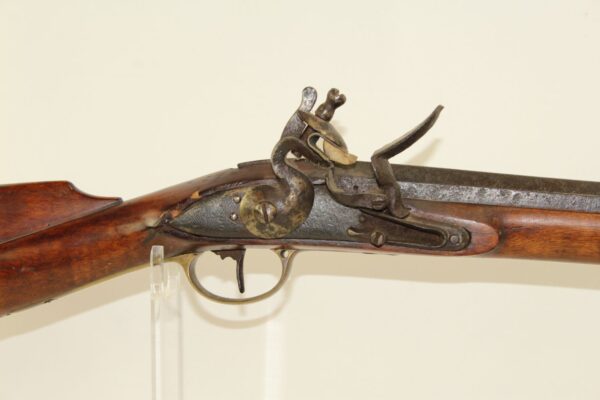 Here we present an 1800 Dated Antique East India Company Marked Blunderbuss, made circa 1800. The flintlock blunderbuss was the original coach gun, being a short, handy and devastating weapon at close range. It was capable of firing up to 20 buckshot in front of 120 grains of black powder, according to Spencer Tucker in Almanac of American Military History, Volume 1. It was used in many capacities, not the least of which were for Naval boarding or defending vessels, stagecoach and messenger companies, home defense and more. Even bandits were known to use them as recorded in the Edinburgh Annual Register, 1813. Seven men, some armed with blunderbusses, entered the home of Mr. Browne of Armayle, Ireland, where his family and Surgeon Brailsford of the Royal Dragoons. The fully transcribed story demonstrating the deadliness of the blunderbuss is immediately below. Just imagine where this has been!

While Mr. Browne of Armayle, Ireland, and his family, were sitting in the parlour at an early hour of the night, accompanied by their guest, Surgeon Brailsford, of the royal dragoons, the house was beset and entered by a banditti of armed villains, seven in number, of whom four took posts as sentries, and three burst in to the parlour. The leader of them instantly presented a blunderbuss, and demanded arms; on which Mr. Browne knocked him down. Dr. Brailsford attacked a second, when in the conflict one of the villains fired at him, and another at Mr. Browne. The latter was desperately wounded by a discharge of small slugs from a blunderbuss, having received several of them in the breast and body; the former was severely wounded by a pistol-shot in the arm, and had his face and head savagely cut and mangled. Dr. Brailsford’s servant, hearing the shots, got a pistol from some part of the house, and attempted to fire it in vain; the powder having been taken out, although the ball was left in the pistol. This gallant fidelity cost the poor fellow his life; the wretch at whom he aimed having instantly blown the contents of a blunderbuss through his body. The ruffians seemed satisfied at the perpetration of these shocking enormities, and left the house, without taking or searching for any arms. Mr. Browne’s recovery is doubtful; Dr. Brailsford is out of danger.

This blunderbuss appears based on the Brown Bess between the lock and the stock. The trigger guard also bears resemblance to the famous musket and is of brass. The barrel is pinned to the stock like the Brown Bess. The barrel appears cast and features a decorative ring about midway as well as aesthetic flutes near the muzzle. The butt plate is a replacement that seems to have been there a while. The lock is maker marked “WILSON” in the center and features the heart motif of the East India Company at the tail, with a date of 1800. The whole thing is rather long for a blunderbuss with a barrel length of 31-1/4 inches. This probably served as a wall gun for use for defense from behind a barrier. This very well may have been made of captured or salvaged parts in 19th Century India. An interesting piece to be sure!

The overall condition is good. The iron parts are dark with age. The markings are legible. The stock shows wear and a bit of fraying at the back of the lock. The bore is dark and dusty. The action remains strong.