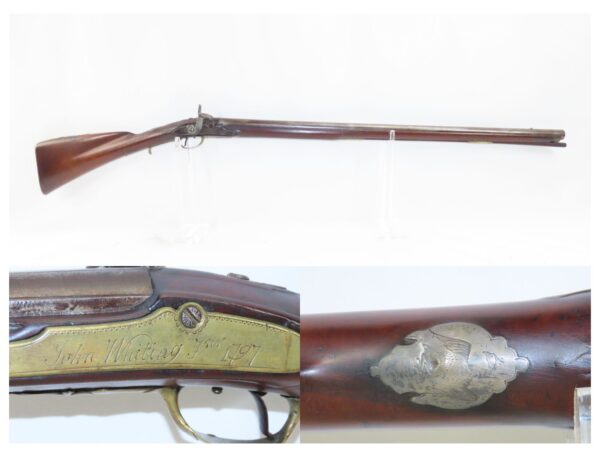 Here we present an antique Thomas Holbrook New England Fowler, made circa the late 1700s. Holbrook was a master gunmaker working out of Sherborn, Massachusetts in Worcester County. In an article by F. Allen Thompson titled “Worcester County Gunsmiths 1780-1830” he expressed his historical passion toward Holbrook in the following. “I believe the most important gunsmith and probably the most influential in this area was Thomas Holbrook (1747-1810) of Sherborn Mass. He made Fowlers, Buck and Ball guns and at least one brass barreled pistol. His workmanship is flawless…” Holbrook was the craftsman under whom John Mason and Lemuel Leland apprenticed, and both of these artisans’ work reflect their master’s.

This piece features a 30-inch round barrel with a .53 caliber bore. It is a fairly petite gun that would have been extremely handy and versatile. With its smooth bore it could have handled a single .53 caliber projectile, shot, or buck and ball, making it effective on all kinds of game or man. Tom Grinslade’s book Flintlock Fowlers The First Guns Made in America: American Fowling Pieces from 1700-1820 feature several illustrations of Holbrook’s work. Pages 80 & 81 show two different muskets with features in common with this piece to include: the shape of the butt stock, the finials of the brass trigger guard and butt plate, the small spur for the little finger at the back of the trigger guard, and the shape of the side plate. The lock on this specimen most closely conforms to the example on page 81. Page 81’s fowler also has a side plate that is engraved with initials and a date of 1801 and the top of the wrist includes a nearly identical silver placard with a primitive eagle engraved upon it. Comparison shows that the same hand likely engraved both guns.

The side plate of this piece is inscribed “John Whiting Jnr 1797”. We believe that this particular gun belonged to John Whiting Jr. (1763-1847) of Wrentham, Massachusetts in Norfolk County (formerly Suffolk County). John Sr. (1734-1811) owned and operated both a grist mill for corn (his ancestor’s—also John—going back to 1685) and a fulling mill (for wool) in Wrentham. John Jr. was one of nine children of John Sr. and Margaret Whiting (1737-1766). Upon the Lexington Alarm of April 19, 1775 John Sr. counted himself among the local Minute Men unit that marched out of Wrentham under Captain Lemuel Kollock in Colonel John Smith’s regiment according to History and Directory of Wrentham & Norfolk, Mass. for 1890 (p. 61). John Jr. is noted as a farmer in Wrentham while his brother Eliphelet inherited the mills. John Jr. was also a founding member of the St. Albans Masonic Lodge in 1818.

The overall condition is very good. The action remains strong and functional. This began life as a flintlock and was converted to percussion, likely in the 1830s or 1840s when this technology really became prolific. Smooth bore is good for age and patinaed. Solid stock with some chipping under the lock. The lock and breech area show lots of use and flash pitting. A beautiful gun from well-known maker in New England.