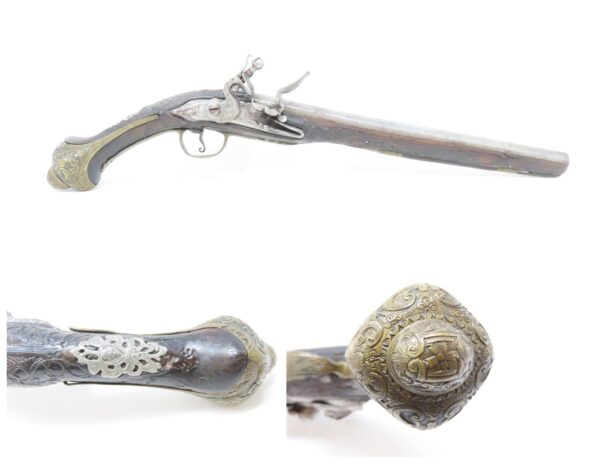 Here we present an antique Engraved and Carved European Flintlock Horse/Holster Pistol, made circa mid-1700s. This 18th century pistol from Continental Europe has beautiful engravings and a relief carved stock. This pistol could have likely been in service during the American Revolutionary War as well as the Napoleonic Wars. Like the cavalry pistols from other nations such as Britain and France, this was a large, single shot pistol with a brass pommel that could be used as a club when the single shot was expended. Here is a fantastic, scarce and historical European Horse/Holster Pistol from one of the most pivotal times in European history!

This pistol is full-sized, made for wearing on a belt or carrying on the pommel holster of a horse. Then as now, rifles and muskets were the primary arm of the day, useful for everything from hunting to combat. Pistols were certainly not as numerous but still very useful for combat since most firearms at this time were limited to a single shot. Imagine if one discharged their single shot firearm only to miss or have another enemy close the distance. A man expecting trouble might carry as many pistols on his person as he could. The true flintlock continued to be in common use for over two centuries, replaced by percussion cap and, later, the cartridge-based systems in the early-to-mid 19th century.

The overall condition is very good. The action is functional with a very strong mainspring. The bore is smooth and dim. The stock is solid. The pommel is firmly in place though the upper arms have sprung a bit outward. A very attractive full-sized flintlock pistol from the 18th Century.