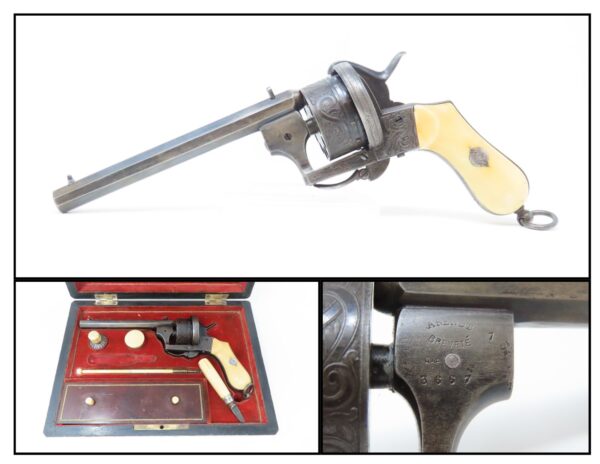 Here we present an antique Maurice Arendt Brevete (Patent) 12-Shot Pinfire Revolver, made circa the 1860s, within a fitted picture-box case by French arquebusier Verney Jne. of Lyon. Arendt was a manufacturer of weapons in Liege registered with the proofhouse between 1857 and 1889. Verney was a maker and retailer at Rue St. Dominiuqe, 10, in the mid-19th Century.

In 1830, notable gun maker and inventor Casimir Lefaucheux invented the pinfire cartridge and patented it in 1835 to become one of the first self-contained firearms cartridges. This very early design included a case with ball, powder and primer, but what made it different from what was to come later in cartridge development was the “firing pin” that projected out of the side of the case.

This set comes packed inside a fitted “VERNEY JNE. A LYON” retailer case lined with red felt. The lid is split (more like separated) and stable. Also included are an oil bottle, cap/patch container, screwdriver, and cleaning rod that are all made with ivory components.All of that makes this a must have collection, but there’s still one more treat! A fully “Shamrock Brand” tin of fifty 7mm pinfire cartridges is included (for domestic shipping only).

The overall condition is very fine. The bore remains in nice condition with strong rifling. The frame and cylinder are deeply engraved with well-defined floral designs. The numbers match throughout. Both ivory grips are fine. The action is as strong and tight for all twelve chambers in both single and double action. This revolver is beautiful and rare, especially in the 12-shot configuration. The original fitted case and the full cartridge tin make this perhaps a one-of-a-kind!