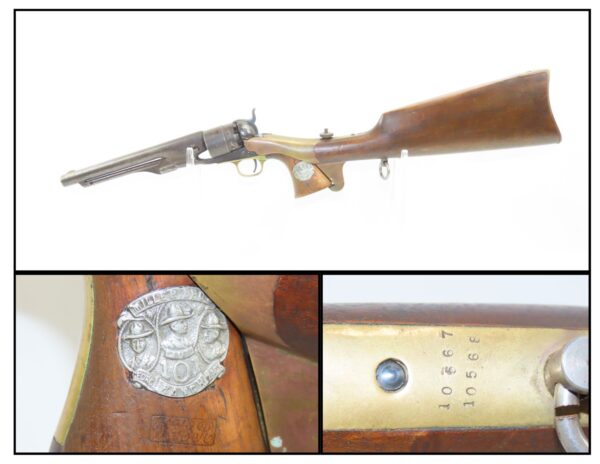 Here we present an antique Colt U.S. Model 1860 Army Percussion Revolver, made in 1863 in Hartford, Connecticut with a 101 Ranch medallion on the left grip.

This revolver bears a medallion from Miller Brother’s 101 Ranch of Ponca City, Oklahoma. After “The winning of the West,” something new was added to the American scene with the birth of the Wild West Show. Names such as Buffalo Bill Cody, Pawnee Bill, and Colonel Cummins are synonymous with the many Wild West Shows that were to become part of our nation’s popular entertainment. The Miller Brother’s 101 Ranch Real Wild West Show stands out as one of the last really big Western extravaganzas. From its inception in 1905 to 1939, their show over-shadowed even the famous Buffalo Bill Wild West Show. Bill Cody was a superb showman, but the Millers built a show second to none.

The 101 Ranch was founded in 1879 by Confederate veteran Col. George W. Miller. At its peak, the ranch was a sprawling 110,000 acres of land that seasonally employed two to three thousand people, where many of the ranch hands were also performers in the Wild West Show. There were close to 80,000 people on the ranch opening day in 1905 with the first Wild West Show. And no wonder with such attractions as the Apache prisoner Geronimo, Buffalo Bill, Tom Mix, Bill Pickett and Lucille Mulhall, plus a buffalo hunt and barbecue, Indian sports and dancing, riding and roping contests, bands and a gigantic parade. Bill Pickett, referred to as the “Negro Cowboy” made the 101 Ranch and Wild West Show famous because of his cowboying and “bulldogging” technique. He went to work on the 101 Ranch in 1905 and remained there for thirty years. From 1905 to 1939 the 101 Ranch Real Wild West Show thrilled audiences and gave life to a bygone era. In addition, the Ranch was also the set of many an early Western film, being used by early motion picture companies from New York to California!

The 1860 Army was the single most used pistol of the American Civil War. Over 200,000 were made from 1860 to 1873, and 156,000 of those were made by the end of the war in 1865. These were excellent sidearms for officers, cavalry, infantry, and artillery troops. The 1860 Army was Samuel Colt’s finest achievement to that point, having finally developed a large caliber revolver that weighed about 2 lbs. 10 oz. to the famous Dragoon’s 4 lbs. 4 oz., and was adopted en masse by the U.S. government with huge contracts. The revolver was well balanced in hand and had a long enough barrel to be effective when utilized as a carbine with the attachable shoulder stock. This revolver represented unprecedented firepower from a handgun in the field at the time and was especially suited to Cavalry. The Confederacy, lacking in manufacturing capabilities though they were, managed to produce limited numbers of copies, and battlefield pickups of the 1860 Army were highly coveted. The 1860 Army went on to serve the U.S. military even after the Civil War and into the Indian Wars, until production of Colt’s 1873 Single Action Army created new waves in the revolver market, and again achieved great success in the military and commercial markets.

The overall condition is very good. Strong, tight action. Good bore. Numbers on the revolver match. Remnants of the cylinder scene remain. The walnut grip is solid and a cartouche can be seen on both sides. The “101 Ranch” medallion is in good shape and sits firmly. Buttstock is a reproduction in good condition.