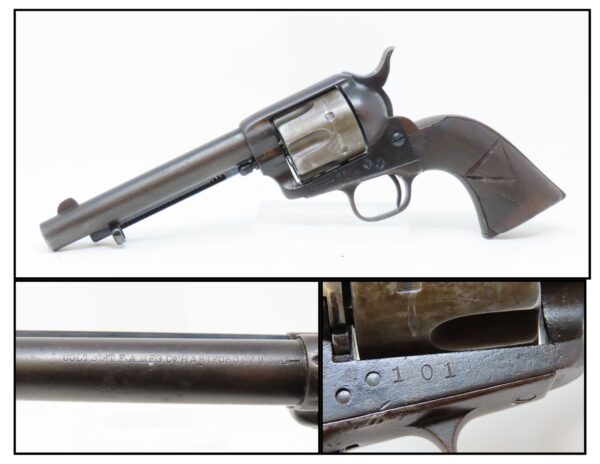 Here we present an antique Colt Single Action Army Revolver Artillery Model, with the frame made in 1874. The Colt Single Action Army, or SAA, is a classic “six-shooter” that is a worldwide icon of the United States of America and the Western Frontier. Wielded by both the worst of men and the best, the famous Single Action Army is also well-known as the Peacemaker. Introduced in 1873, the basic design remained, with a few interruptions, in production and is still manufactured today by Colt and other companies.

The right side of the frame reads “101”. This is a very old, stamped marking that was applied after it left US military service—weather it was sold as surplus or otherwise. It may be a reference to the famous and massive 101 Ranch that was founded in 1893 in Indian Territory in what is modern day Oklahoma. The left side of the frame is stamped with patent information and “US” acceptance marking.

The action is strong and tight, with 4 clicks and solid lockup. The bore is dim with visible rifling. Both grips show lots of wear and have been carved long ago with point-down triangles. Many of the screws have been replaced along with the arbor pin and the ejector assembly. This is an interesting old Colt SAA that has clearly seen a lot of use in its day.